There is no doubt that the Amazon Rainforest is one of the most amazing places on the planet. It's a massive natural landscape that is home to a diverse and unique ecosystem. Thousands of different species exist within the forest when you take into account animals, plants and trees.

The Amazon is also where more than 20% of the planet's oxygen is created. This is why you may hear the area referred to as the "Lungs of the Earth". It helps the Earth and its inhabitants to breathe. This is one of the very good reasons why organisations like One Tree Planted enable businesses and individuals to contribute to tree planting projects in the Amazon and across the world. There are several other fascinating facts about the Amazon that clearly illustrate why protecting the forest is so important.

The Amazon is the largest rainforest in the world

Quite simply, the Amazon is hugely impressive because of its scale. It's the biggest area of rainforest on Earth and we need to do all that we can to keep it that way.

Carbon is stored in this massive rainforest

The sheer size of the Amazon Rainforest means that it's an impressive store for huge amounts of carbon as you can see mentioned by organisations like Project Drawdown.

Unfortunately, forests like the Amazon have been losing some of their ability to store carbon, and protect the environment. Today, they only store around two thirds as much carbon as they did in the 1990s. This problem has been brought about by several different issues such as deforestation and global warming. In order to try to address the problem, organisations are supporting reforestation in areas like the Amazon. They are making sure that the numbers of trees in these forests are successfully maintained.

For instance, individuals who want to support the protection of areas like the Amazon Rainforest can download the TreeClicks app. TreeClicks is an organisation that is dedicated to the protection of the environment in areas like the Amazon, by the planting of trees. Users of the app can make purchases from thousands of different stores. When a purchase is made, the store gives money to Tree Clicks in recognition of them providing custom. Most of this money is then used to plant trees around the world. This type of help is essential in making sure that the Amazon can continue to be an effective carbon store. 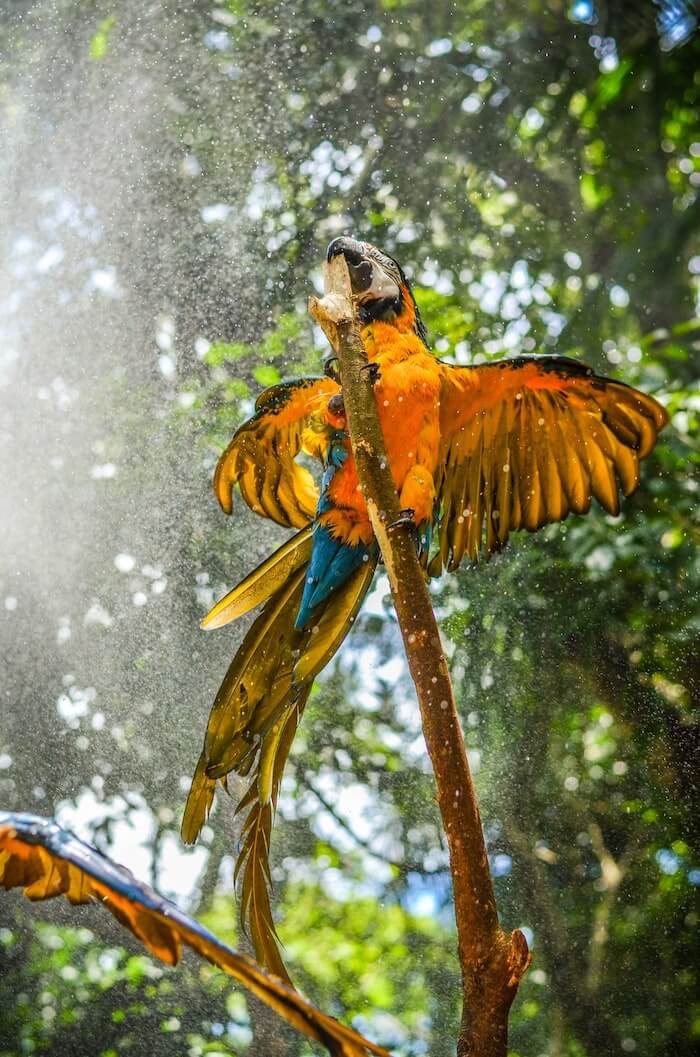 The Amazon River is just as impressive

It's not only the Amazon Forest that is awe-inspiring. The Amazon River is also impressive. It's the largest river in the world when it comes to volume. It has more than 1,100 tributaries in total. Incredibly, 17 of these tributaries are more than 1,000 miles long in their own right.

Millions of years ago, this majestic river flowed in a different direction than it does today. It was only when the Andes Mountains started to form, 45 million years ago, that the River was forced to flow eastward into the Atlantic Ocean.

There are thousands of different species in the forest

Arguably, the most fascinating aspect of the Amazon Rainforest is the myriad of different species that can be found there. It's a melting pot of both fauna and flora.

427 different species of animal make their home in the forest, including sloths, river dolphins, macaws, anacondas and poison dart frogs. Amazingly, one in ten of all animal species in the world live in the Amazon. This includes one in five of all bird species.

That is just part of the story though. Smaller life forms are prevalent throughout the Amazon. Around 100,000 different species of invertebrate are thought to live in the forest. It's also possible that there are species which are yet to be discovered.

This is not surprising, in the largest rainforest in the world. However, it's still fascinating to understand just how big this dominance is. There are more than 400 billion trees in this part of the world. These trees represent around 16,000 different species. Some of these species are especially dominant in the Amazon. The species that are most common include the Shiringa, jebe débil fino, or caucho (often referred to as rubber trees), the Huasaí or palmito and the walking palm or cashapona. The 227 species of tree that are most prevalent make up around half of the total number of trees in the Amazon.

The Amazon Rainforest is one of the most precious attributes that the Earth has. It's a vast area of unmatchable beauty. However, this is only the tip of the iceberg when it comes to just how important the Amazon is.

Most importantly, it helps the planet and its inhabitants to breathe. It also protects the atmosphere around us. Obviously, these are attributes that the planet cannot afford to lose. This is why it's so important to use sustainable practices to protect the Amazon Rainforest, including carrying out tree planting projects.

These projects help to protect a Rainforest that is not just important to the human population of the planet. They help to create a secure home for thousands of different creatures and plants. It's important that work to protect the Amazon continues. Taking care of this incredible part of the planet means that we can ensure that future generations get to be just as fascinated by it as we are.